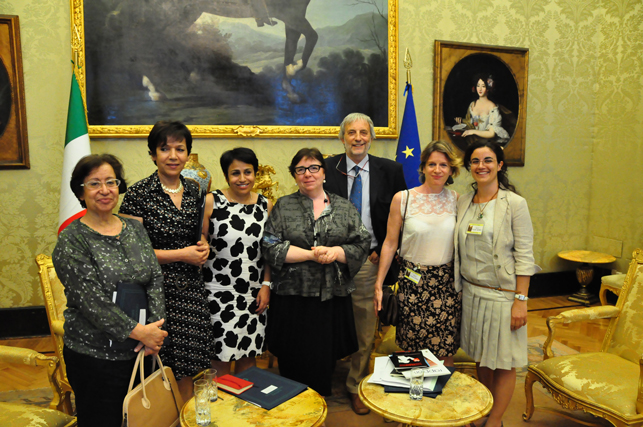 The “Association Tunisienne des Femmes Démocrates” (ATFD) has worked for more than twenty years to promote women’s rights in the more general context of the affirmation of human rights.

ATFD was founded in 1989, thanks to a period of political open-mindedness in the country, building upon a feminist movement that had previously been active for ten years. Although the situation of Tunisian women was much more advanced than that in other Mediterranean countries, it was nonetheless necessary to counter - with a positive renewal strategy - the  State’s manipulative approach with respect to the women’s question and the failure on the part of the political parties of the democratic opposition to strategically address the issues pertaining to equality for women.

ATFD was the first independent feminist association to work on the subjects of equality and citizenship, closely related to democracy and the separation between religion and politics. Thanks also to fruitful exchanges with other movements in the Maghreb and in the Mediterranean area, the Association was able to clearly identify the interconnection between women’s rights and human rights on the one side and legal equality and political democracy on the other. There is an indissoluble link between feminist battles and battles for democracy in ATFD’s approach.

During the dictatorship, in collaboration with other organizations committed to defending human rights, ATFD placed the application of international conventions at the center of its endeavours, in particular the CEDAW Convention (Committee for the Elimination of Discrimination Against Women), in the hope that Tunisia would withdraw its reservations in this respect, raised at that time under the influence of conservative factions. Another important battle was that for the application of the Code du statut personnel, adopted in 1956, which recognized many rights to Tunisian women, including divorce, well before other countries in the Mediterranean area.

The Association also raised fundamental issues such as abuse against women, discrimination with respect to inheritance and the specific dimension of poverty for women. It did so courageously and wholly independently from the regime. For this reason it suffered a severe repression aimed at its activities and against its members.

In addition, ATFD has worked steadily towards promoting:

- the fight against sexual harassment in schools and in the workplace, contributing to the approval of new regulations on this subject;

- a campaign for equal inheritance rights;

- the creation of the feminist university Ilhem Marzouki (2009), “as a meeting point for ideas and individuals for women’s rights” aimed at both women and men;

-  freedom of expression and the right to information;

- the right to an education and the right to work, especially with respect to unemployed graduates (one of the focal points of the recent revolution).

Approximately 200 women are currently members of the Association, which carries out its activities primarily in Tunis, also because during the dictatorship access to the provinces was severely hindered, no less so than to the more densely populated areas. Nonetheless, in 2008 this did not stop the Association from supporting the fight in the mining area of Gafsa.

During the revolution the Association opened its offices to the movement, becoming a reference point for the various associations dedicated to human rights, notwithstanding the strict controls enacted by police forces. Before, during and after the recent elections the Association actively monitored the media with respect to gender issues.

In the current context of democratic transition, ATFD is active in institutions as well as in the provinces to defend and promote the freedoms achieved, striving to adapt its objectives and policies to a rapidly changing scenario.

The award given to the Association Tunisienne des Femmes Démocrates therefore is to recognize the long and courageous struggle for women’s rights and for human rights on the part of one of the most significant associations operating in Tunisia. It also purports to underline the centrality of the fight for women’s rights as an essential condition for the success of the democratic transition in a reality marked by profound changes. A reality that Alexander Langer, also thinking of a positive role that could be played by a country such as Italy, rightly comprehended in the broader Euro-Mediterranean space, due to its centuries-old existence as a meeting point and an area of integration amongst cultures and peoples. Today, over and above the contradictions and conflicts inherent to the area, the new Arab spring seems to have paved the way for great opportunities and renewed hope, along the lines that Langer himself hoped for with new forms of partnership among different countries and players, to create favorable conditions for peace and encourage a more balanced development that respects the environment. So that the Mediterranean area does not become just an “area of nostalgia or a lost paradise” but that the peoples who share its shores may rediscover and benefit from their common cultural heritage.