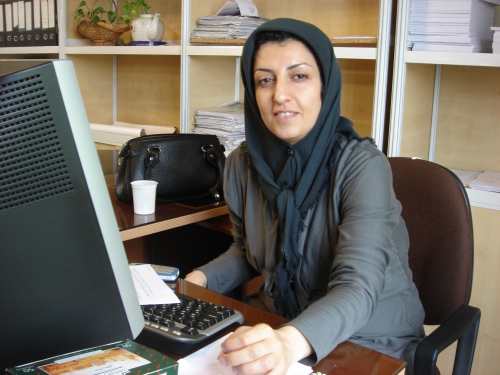 Narges Mohammadi was born in Zanjan in 1972. Since she was a child she has been sorrounded by the hopeful atmosphere of the 1979 Khomeinist revolution which collected the wishes of a national, anticolonial liberation in a country rich in resources, history and endowed with an ancient culture. She was only 16 in 1988, when an end was put to the long war against Saddam Hussein’s Iraq and when the people of an exhausted and impoverished society began to request freedom, democracy as well as economic and social reforms.

When Narges was still a student at the Faculty of Physics, she became the initiator of a students’ association called Roshangaran (transl.: the scholars): she wrote articles for independent newspapers defending the rights of women and students. She was also arrested for gatherings considered illegal. In this period people began to reflect upon the impact of ideologies spotting a danger even in non-violent supporters of rights and of a participated democracy. These supporters profoundly respect the religious sentiment, and for this very reason they reckon that it cannot be identified with the theocratic model which has been asserting itself within the country.

After these incidents, Narges has added the defence of convicts to her goals, especially those imprisoned for crimes of opinion who are often arrested without precise charges or evidence, whose defense lawyers are not allowed to have the files of their clients. As a journalist she has written for various reformist journals, including Hajar, fighting for the equality of all citizens regardless of their gender, political opinions and religion. Because of this, she was arrested twice  and was compelled to renounce her youth passion, mountain expeditions.

Narges has also started a close collaboration with Shirin Ebadi, recepient of the Nobel Peace Prize in 2003, and has become vice-president and spokeswoman of the Centre for the defenders of human rights which provides legal assistance to hundreds of dissidents. After the illegal shutdown of the centre on 21st December 2008, the international press has strongly highlighted her declarations of protest and shed light on the significant support that the Centre has been able to obtain. On 7th September 2008 Narges Mohammadi was elected as President of the executive committee of the National Council of Peace in Iran, a broad coalition with the aim of avoiding the danger of an internal military fight. It includes men and women with different stories, writers, artists, lawyers, social activists, students, trade unionists, representatives of ethnic minorities and political groups. The Council is mainly against any military or violent action, and is also strongly opposed to preventive armed conflicts against Iran. In fact, these measures would not solve the nuclear crisis; on the contrary, they would upset the already fragile balance of the Persian Gulf region and further worsen the human rights situation. The National Peace Council wants the world to see “another Iran”, which is against any violent action and is committed to the construction of peace, safety, stability and well-being through relationships based on tolerance and friendship. Narges is convinced that the Iranian society deeply wants changes in favour of democracy and the full respect for human rights: “It is not an elite’s problem, it is an entire nation’s”. On 8th May 2009, while she was preparing to leave for Guatemala, her passport was seized. She read in the press that she is generically accused of having led “propagandistic activities against the Islamic Republic of Iran”.

Alexander Langer’s last intervention at the European Parliament on 29th June 1995 was dedicated to a request for support to Algerian women who had been the protagonists of the fight for the anticolonial liberation; they felt a major threat to the rights that they had finally conquered. Since then, various awards have helped the Foundation to build a chain of friendships and relations with that part of Islamic world searching for dialogue and credible participants. One of them, Khalida Toumi Messaoudi, has never stopped claming her freedom to be at the same time Berber and Algerian, Muslim and Rationalist. Similarly, Vjosa Dobruna from Kosovo has been able to maintain a continuity in the relationship with her Serbian friends even in the hardest times; the Palestinian Sami Adwan who has been comparing, together with his Israeli friend Dan Bar-On, the reasons of their respective peoples in war for too long; Irfanka Pasagic, refugee from Srebrenica, who came back to her hometown to scatter the seeds of truth and dialogue. In the same way, the miracle of the Somalian village Ayuub built by Maana Suldaan and Elio Sommavilla, respectively a Muslim woman and a Christian priest. Now it is the turn of Narges Mohammadi to further enrich this constellation of mediators and people who build bridges, overcome hurdles, explore frontiers and bring hope.

The award, comprising a 10.000 Euro donation offered by the Fondazione Cassa di Risparmio di Bolzano, was given on 2nd July 2009, in Bolzano, at the annual “Euromediterranea” event organised by the Alexander Langer Foundation.