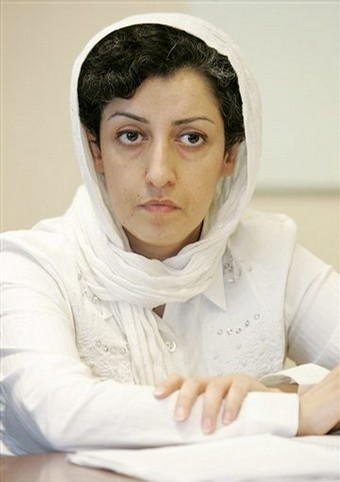 The Scientific and Guarantee Committee of the Foundation has decided to bestow the international Alexander Langer award 2009, sponsored by the Stiftung Südtiroler Sparkasse, upon Narges Mohammadi, Iranian journalist as well as vice-president and spokeswoman of the Defenders of Human Rights Center, and president of the executive committee of the National Peace Council.

Narges Mohammadi was born in Zanjan. She became a professional engineer after graduating in physics at the International Imam Khomeini University. During her university studies she organized a university formation named Roshangaran and wrote articles for independent newspapers about the respect for the women and students rights. She was arrested twice in 2 university meetings.

As a journalist she wrote for various reformist journals, among these Payam-e Hajar. Later this publication was banned as it upheld fighting for the equality of women and the rights of all citizens regardless of their gender, political opinions and religion. She is also the author of political essays, i.e. The reforms, the strategy and the tactics, in Persian.

Because of her passion for the mountain, she organized climbs and took part in the ascent of the most important Iranian peaks. However, due to her political activity, later she was no longer allowed to take part in the official expeditions.

In 2001 Narges Mohammadi got married with Taghi Rahmani. She knew him when he was teaching Civil Society courses, students were quite numerous at his lectures. Now they have two twins. Right after their marriage Rahmani was arrested. Only after a two-year custody he could come to know the accusations which had been levelled against him. He spend one thirds of his life in prison because of his critique against the theocratic regime. On the other hand, his repeated arrests have induced Narges Mohammadi to pay particular attention to the situation of the convicts, especially those for crimes of opinion, who are secluded - quoting her words - in the violation of "the most basic principles of law, with illegal imprisonments, without stating the accusation, without evidence, without a sentence, prohibiting the counsel for the defence to have the files of their clients". Because of these criticisms and after her husband's arrest, she was imprisoned in 1998 and sentenced to 1 year imprisonment. Nevertheless, this experience has given her a new strength to assist the dissidents imprisoned and their families.

Now she also works closely with Shirin Ebadi, recipient of the Nobel Peace Prize in 2003, and has become vice-president and spokeswoman of the Defenders of Human Rights Center. After the illegal shutdown of the center on 21st December 2008, the international press has reported her denunciations and declarations of protest.

On 7th September 2008 Narges Mohammadi was elected as president of the executive committee of the National Council of Peace in Iran, a broad coalition against war and for the promotion of human rights. It includes writers, artists, lawyers, social activists, women, students, trade unionists, representatives of ethnic minorities and political groups opposing to any military or terroristic action and preventive armed conflicts against Iran. In fact, these measures would not solve the nuclear crisis; on the contrary, they would upset the already fragile balance of the Persian Gulf Region and further worsen the human rights situation.

The National Peace Council wants the world to see "another Iran", which is against any violent action and committed for the construction of peace, safety, stability and well-being through relationships based on tolerance and friendship.

Narges Mohammadi is convinced that the Iranian society deeply wants changes in favour of democracy and the full respect for human rights: "The Iranian society has been strongly claiming its right to democracy. Students, workers, teachers, women, youngsters have precise requests and the Government will have to give them an answer. A satisfactory answer. It is not the problem of an elitarian group, it is the problem of an entire nation".

The award, comprising a 10.000 euro donation offered by the Fondazione Cassa di Risparmio di Bolzano, will be given on 2nd July 2009, in Bolzano, at the annual “Euromediterranea” event organised by the Alexander Langer Foundation.