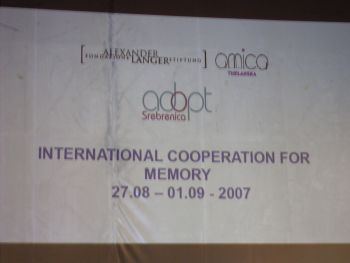 A week of initiatives, seminars, meetings with eyewitnesses and significant experiences related to the difficult rebirth of Srebrenica and the Balkans in general. An opportunity to get to know another side of Europe. And through our presence support those who work for preserving memory and building a new future.

in the framework of the project  Adopt Srebrenica

with the support of

LIFE AND VOICES IN SREBRENICA

from 24th to 29th of August 2008 in Srebrenica - Bosnia Herzegovina

Women and men of different backgrounds, origins and histories, we will meet also this year in Srebrenica, in Bosnia and Herzegovina, place of memory for all its inhabitants and for the whole of Europe. We’ll spend a week together; we’ll exchange experiences and ideas, in order to prove that life is stronger than war and genocide, but only if it is fed with truth and justice about the past.

We’ll meet once more in Srebrenica, we’ll listen to the silence of loss and trauma, but we’ll also give space to the voices that wish to express memories, feelings, thoughts, wishes and hopes: for themselves, for their town, for us all.