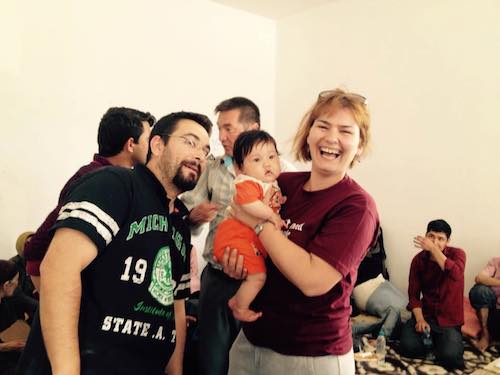 “For a welcoming, aware and supportive Euro-Mediterranean community”

In April 1995, Alexander Langer wrote in Verdeuropa: “Nowadays, governments are worried about certain alarm bells and they tend to deal with them, but too often in a merely repressive way: uncontrolled immigration, social tensions and “bread riots”, the growth of Islamic fundamentalism, the risks of illegal drug and arms trafficking… dangers more than opportunities. The next inter-governmental Euro-Mediterranean conference, announced by the European Union and due to take place in November 1995 under the Spanish presidency, has the positive aim of establishing a new Euro-Mediterranean partnership. However, it risks only seeking to curb some of these supposedly threatening phenomena, through cooperation and financing agreements, without risking a bolder move: a partnership that will lead to a veritable Euro-Mediterranean Community, alongside and entwined with the European one”.

These words help us to understand why the Langer Foundation has decided to award the 2017 Langer Prize to two organisations – Angaliá from Lesbos and ASGI – which, in two European countries (Greece and Italy), and in two different yet complementary ways, have for years been tackling the difficult and inescapable challenge posed by the thousands of people who defy death daily in order to cross European borders.

ASGI states in its Italian regulatory reform programme on the right to immigration, asylum and citizenship, presented on 21 March 2017: “Immigration is a structural and normal phenomenon that has deeply changed the Italian socio-economic system, but that was not foreseen or governed because the majority of people, public authorities and politicians could not or would not implement effective policies to handle this reality. Rather, they continued to treat it as a temporary phenomenon, to be managed with sporadic or emergency measures, or with recurring regularisation procedures for illegal entry (while always obstructing legal entry for employment purposes), or as a security threat (with few exceptions due to the compulsory implementation of EU directives and the right of EU citizens to freedom of movement), in any case denying adequate funding for social integration policies for foreign citizens”.

Furthermore, it is particularly tricky nowadays to clearly define the difference between economic migrants and forced migrants. The reasons for incessant migration can be found in wars, dictatorial or repressive regimes, the long-term consequences of European colonial policies, the pillage of natural resources, climatic and environmental factors that lead to poverty and inequality, and constant population increase.

In a global world in which goods move freely, often following trajectories that evade checks on their production lines or on the rights of the people producing them, people themselves do not enjoy the same freedom of movement. Not even when they flee from bloody conflicts that are ravaging their countries of origin.

Having taken all this into consideration, our choice has been made around three main criteria. Firstly, it is necessary to defend the rights of migrants based on the Universal Declaration of Human Rights, our Constitution, and democracy. These must be respected when new laws come into force, as well as when current laws are implemented. It is also necessary to build welcoming, aware and supportive communities. Moreover, a greater sense of belonging to Europe must be disseminated – a shared responsibility and desire to build peace “among men, with nature, among peoples”, to use Langer’s words. We believe that Angaliá and ASGI constitute exemplary models of such criteria.

The NGO Angaliá (meaning “hug” in Greek) was founded in 2008 in Kalloní, a town in the centre of the island of Lesbos, by local priest Father Stratís and three other volunteers.

It focused initially on assisting those who were hit hardest by the economic crisis, which to this day still leaves 15% of the Greek population living below the poverty line. It then started to work with the ever-increasing number of refugees who were reaching the shores of Lesbos.

In 2016, Angaliá focused on the 200+200 project, seeking to support 200 local families who had fallen victim to the “structurally complex reality that is poverty” and 200 refugee families who were facing particularly serious problems.

As well as offering economic support, Angaliá’s activists – as stated in their 2016 End-of-year Report – sought to “unite people and bring the message of shared solidarity to locals and refugees, so that they would understand that in today’s world poverty, persecution, discrimination and marginalisation are often born of common causes and can be tackled only through non-discriminatory collective solidarity”. This two-pronged approach to help both the local poor and those from further afield is one of Angaliá’s most innovative aspects, particularly in the context of interconnected crises that can be traced back to various factors: war in the Middle East, the struggling Greek economy, a fraught political system in Turkey and the difficulties affecting policies and values in all of Europe.

Angaliá presents itself as “a group that doesn’t belong to any official agenda” and wants to distinguish itself from the often dubious practices that have been adopted towards refugees. Its members believe that it is necessary to act “simply” as citizens who cannot avoid taking on responsibility for what is happening before their very eyes. They do so on an entirely voluntary basis, without seeking European or government contributions, in order to maintain their critical freedom. The 200+200 project was also possible thanks to the vast volunteer network built by Angaliá with organisations and citizens from all over Europe; this promoted material support, medical assistance, cultural and artistic exchanges, and political planning. It is no coincidence that between 2015 and 2016 Lesbos had an unprecedented increase in young European volunteers, a precious resource that should not be wasted.

Angaliá does not hold back from harshly criticising European policies. While these policies managed to contain the flow of Syrian, Afghan and Iraqi refugees through agreements – rightly questioned – between Turkey and EU member states, they unfortunately did so through “militarisation” and “inhumane refusal of entry”. “It is unbearable to count the number of lives claimed in 2016,” states Angaliá, “while the material hardships inflicted on refugees in the middle of winter highlight our collective failure to reach the supposed level of civilisation that we proclaim”.

The Italian Association for Legal Studies on Immigration was founded in 1990 by a group of lawyers and university lecturers, with the aim of guiding the work of Italian lawmakers toward adopting regulations governing the entry and residence of foreigners and asylum seekers, in compliance with fundamental human rights and constitutional principles. It has also worked to encourage Italian society to develop a positive approach towards the far-reaching changes brought about by international migration.

ASGI has contributed for over 20 years to the development of national and EU regulations on immigration, asylum and citizenship, promoting the protection of foreigners’ rights in political and parliamentary debate as well as in the work of public authorities. It has offered ongoing, widespread and high-quality training to all: from volunteers to activists and social workers, right up to lawyers, committee members, police departments and prefectures. It has provided direct operational support to migrants and operators in individual cases, through appeals, consultations and advice. It has provided complete, detailed, ongoing and critical information on Italian and European migration law. It has practised effective legal opposition to all forms of discrimination against minorities.

In the past few years, particular attention has been given to the protection of forced migrants (asylum seekers, refugees and displaced persons) and on developing proposals, at European level too, to combat xenophobia and populism and protect fundamental human rights. In this vein, ASGI has supported and won many disputes both in Italian and EU courts (the European Court of Human Rights and the European Court of Justice) on crucial issues related to foreigners’ rights, such as discrimination, forced expulsion, arbitrary detention, and the right to asylum.

ASGI is based on voluntary work and is a totally independent organisation, using legal tools to cooperate, interact and – where necessary – come into conflict with any type of government and institution whenever the rights of people migrating, settling or transiting through Italy are at stake. ASGI, which now has a growing number of female and foreign members, has become a point of reference for associations, public and private bodies, students, lawyers, social workers and anyone with the desire and need to remain up-to-date and discuss immigration issues.

All this makes ASGI a paragon and an example at European level of how the principles and practices of democracy can constitute an essential safeguard for positive relations among peoples.

Today, in Italy as in the rest of Europe, the debate on migration has become a daily battlefield, all too often founded on a lack of understanding and a chronic inability to see matters through a broader perspective. It seems that little has changed in the 20 years since Alexander Langer criticised EU member states for their inability to develop a common policy on migration, to establish a valid partnership with migrant countries of origin, to manage migration flow intelligently and offer effective forms of reception and integration that respect fundamental human rights. In fact, Europe’s general predicament and powerlessness seem to have worsened.

Faced with such a situation, the decision to award the 2017 Langer Prize to Angaliá and ASGI seeks to go against the grain, to show what could be the right path to follow. In their respective histories and concrete goals, the two organisations undoubtedly appear very different to one another. And yet at the same time, they just as clearly complement each other. They both show how it is possible to bring together aspects that are as diverse as they are essential: helping those in need, respecting fundamental rights, grass-roots volunteering, maintaining independence from self-interested pressures, controlling institutions and encouraging them to act in compliance with democracy, refusing to limit migrants to being “refugees” or “victims” and instead ensuring they have the same rights as anyone else.

The 10,000 EUR Prize money has been offered by the Fondazione Cassa di Risparmio, Bolzano.