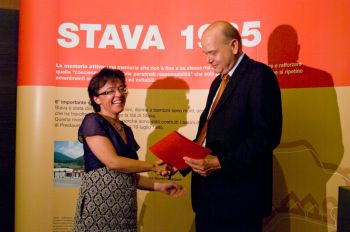 The Alexander Langer Award 2010 goes to the Stava 1985 Foundation On July 19th, 1985, at 12:22 pm, a sudden wave of muddy mass destroyed the Stava Valley, situated on the side of the Fiemme Valley in the Italian province of Trento. Within a few minutes, the mudflow killed 268 women, men and children. The cause of the disaster was the collapse of the tailings dams of the Prestavèl fluorite mine. But the true reasons of the tragedy lay in the irresponsible tendency to ignore the simplest work safety standards while considering the environment only as a commodity. This was particularly so in those years of industrialist enthusiasm for the “economic miracle”. And this provoked terrible wounds to the local community and to the home communities of the many tourists involved. Twenty-five years later, the remembrance of what happened continues to pose the question of the human, cultural and political consequences of that disaster and other similar tragedies which happened before and after Stava, in other parts of the world. The legal proceedings ended with light but important imprisonment verdicts and with a compensation for the victims. They brought at least to a sure explanation of the facts and responsibilities involved, and clearly identified the joint culpability of the mining companies and the public boards in charge of the conservation of the territory, for blatant lack of control. However, the trial represents only the first step toward an improved consciousness of the irresponsible and culpable way in which short-term economic profit was given absolute priority over the respect of the environment. Further and more important, it also leads to a better understanding of how individual behaviour and public policies should change.The Stava 1985 Foundation pursues the objective of stimulating reflection and keeping attention awake on such important issues. It was created right after the disaster, building on the strong emotions of that tragic moment, in order to manage its long-term consequences. The Foundation worked in many directions, with continuity, courage and intelligence:- it took care of the trauma and memories of the victim's families, both in outside the Stava Valley. The assessment of what happened was founded both on the rational clarification of facts and on deep respect for the victim's pain, memory and individual sensitivity;- it gave form to an effective educational project which looks at the future, being directed specifically to the youth. It also created information material and initiatives targeted to different groups of people, i.e. visits to the place where the disaster happened and scientific trainings for specialized professionals; - it started initiatives of solidarity and reflection with other communities which were involved in similar tragedies, both in and outside Italy.Furthermore, the activities of the Stava 1985 Foundation are utterly balanced and constructive. Far from simply screaming against injustice, they aim first and foremost at building consciousness and improving policy practices and behaviours. While reflecting on the relationships between society and the environment in general, at the same time they remain focussed on the issue of responsible management of territory and water.This tenacious, tangible and long term engagement was also at the basis of the actions of Alexander Langer, who at the time was a member of the Regional Assembly. At the very beginning of the legal proceedings, Langer denounced culpable reluctances to act and fought for the right of the victims and their families to truth and justice. The Stava tragedy inspired also his reflections about an ecological conversion of the economic system, individual lifestyles and consumption patterns. “We are borrowing the earth from our children”, he said at that time.  With this award, twenty-five years after that tragedy, the Alexander Langer Foundation intends to acknowledge and honour the engagement of the Stava 1985 Foundation in favour of active remembrance. The Stava 1985 Foundation constantly reminds us not to repeat the mistakes of the past and encourages us to look for new and better ways of living, which respect both the rights of human beings and the environment.