The New Story -- Robin gets what she really deserves - An autobiography 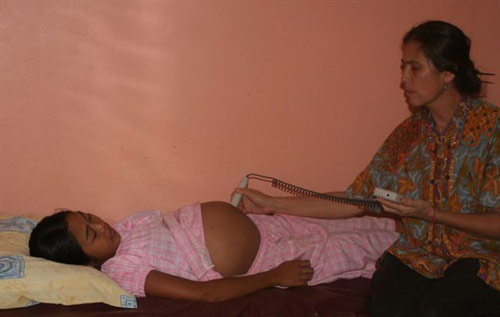 The birth happened quickly, quietly. Cresencia wanted it that way, so her American husband would not take her to the hospital. Vicenta, the grandmother midwife, Cresencia’s own mother received the baby girl into her hands. Within that first half hour of life, Cresencia fed her firstborn at her breast.

The child, Robin, seemed to walk a magical path, as if rose petals would fall at her feet. She soon had a younger sister, Christine, and three younger brothers. There were special days, snowy and the furnace would be broken. The children would find themselves all bundled together in their parent’s bed, eating popcorn. There was Cresencia’s flower garden, which set their house ablaze with color. Robin liked best the tiny purple Jonny-jump-ups.

Even bad days, when Robin dropped the thermos at the bus stop. she picked it up, shook it and heard the shards. Held it too close, and Coca-Cola fizzed out all over her legs, and her pleated Catholic school uniform skirt, and filled her shoes with sticky wet, which began to get so cold in the foggy morning... Cresencia sensed something, she came out to the corner, just before the buss collected Robin, and hugged her, and took her home for a warm bath. She made it ok, every time.

There were boys on the bus who said, “Your mommy is a nigger.” I didn’t know what they meant. “Are you a nigger?” She asked her mother. Cresencia laughed and said, “I could be. We are Filipino and Chinese too. You father is irish and German and some other things mixed in. We are the all mixed up family. that’s why we are all so pretty and so smart.” Robin quite liked being called a nigger after that.

Sometimes it seemed there was not enough of the kinds of things kids had, toys and snowball cakes, but there was always enough love. Robin was proud when she carried the lunch to school for herself and four siblings. They felt lucky that Cresencia packed rice and vegetables and a little fish. The other kids ate sandwiches, and bought their milk with money. They ate with friends. Robin and Christine and the boys ate together.

They traveled. “Military brats,” people would say. They hardly finished a full school year in the same place. This was the luckiest. They knew snow, and New Jersey bumble bee Summers. They ate a lot of butter cup flowers, then they got sent to Okinawa. There were caves in Okinawa, with poisonous Habu snakes, and rumors of soldier skeletons from the war. Robin saw a tide pool, with a sea horse trapped in it, running out of water. She took him in her bucket to the deeper part of the ocean. Maybe he was a pregnant sea horse father, she would not want a whole new generation of sea horses to die before birth in too little hot salty water.
Christine grew plump and pretty, with curls. Robin was more like Cresencia’s people. Both of the girls found school fun and easy and loved the nuns. Sister Mary Verda was the best. One day a humming bird appeared with one wing stuck under the Mother mary statue, high up in the front of the classroom. Robin ran to get Christine’s class, to see the miracle. Sister mary Verda always let her do these things, like get her sister when a miracle needed to be witnessed. When Robin missed her mom, she could send her guardian angel to quickly bring her mom a message... “I love you... I’ll be home as soon as the bus brings us back.”

Robin married young, and had a baby while she was just 19 years old. She wanted it this way, a little girl called Deja Cresencia, to keep the family line going. The midwives were a little taken aback at how easily Robin birthed. The first week of breastfeeding was a little hard, but Robin loved every minute of gazing at this baby girl, of inhaling her scent.

There were more Children. Noel with blond curls. The first two children’s father went his own way. Robin took pride in her single motherhood. Next there was Zhou, who was first seen in a dream. Four nights after Grandma, Nanang Vicenta died she came to Robin - and tried to give her a basket, with a Chinese Baby Girl inside, sleeping. Robin was careful, “What will I do with that baby Nanang?” The old woman laughed. all night she came again and again offering the gift. Robin absentmindedly took the basket. In the morning she met Zhou’s father. A boy was next, born outside in a tub of water, while a warm wind brought gardenia and night blooming jasmine to their noses. He was born at a time so special to astrologers, that strangers brought him gifts. His ‘chart’ boasted two grand trines in fire, they made a Star of David. Robin was single again by then ... and could not name the child. On the 42nd day, when the birth certificate must be filed, the midwife called and told her to pray for a name. Robin meditated, while nursing the boy. She reached over her shoulder where books were lined up behind her. She grasped one, eyes closed, “What book I wonder is this?” And opened a page. Put her finger down... ”And you shall know thy children’s children, and you shall name them Zion.” Robin didn’t own a bible... but here was one in her hand... and the name of the boy, under her finger... Zion.

Many happy and prosperous years in Hawaii later. Robin’s sister Christine died. Robin had her nephews, Gary and Nick for a while, for a time of healing. She taught the children how to milk goats. There were eggs from chickens. Vegetables picked and cooked right up. There was salad with flowers in it, edible Jonny -Jump-ups, and baby goats to chew the children’s fingers. Ducklings to follow them into the garden. Robin’s midwife died, and then Brenda, her best friend. All three of the closest women in her heart had left - gone. Robin learned something that year in the garden. She learned that there is no reason to compromise, that she was born to love and not to hunger for love. The children, the deaths, the goats, the geese, Gloria the turkey... all taught her this.
Knowing this deeply, Wil came into her life... he had two children, Brenda’s daughter Lakota and Brenda’s son, Thor. The children moved in with Robin and the children and the goats and the hatching ducks and the potato harvest, and the basil to make pesto... and the bread made purple with taro root. How could Robin and Wil not fall in love?

They took this love to Bali and made a boy together... Hanoman, with red hair... and Cresencia’s Asian eyes. After that all sorts of miracles came and came... Robin became a midwife. Her books brought them lots of prosperity. She organized with other like souls, and together they made many miracles of self-less service happen in Bali. Robin and her family were so well provided for... all their needs and dreams were fulfilled. They shared perfect health.
Om Shanti -- for now... to be continued

This collection of poems and one story was written over a number of years... 1998 to 2005. During this time l lived and traveled with my family in Bali and Aceh, Indonesia, Baguio City, Philippine Islands, Maui, Hawaii, Punta Gorda, Belize, Antigua, Guatemala, Fairfield, Iowa, Paris, France, and Singapore.

It covers a brief history, the passage of a millennium, new thresholds of violence and humanity on the planet, which have left us all trembling. It is at once personal and political. It is a mother and grandmother’s perspective, written with a midwife’s bloodstained hands.

Some of these poems have appeared in Midwifery Today, The Birthkit, 100 Poets Against the War, and The Fairfield Weekly Reader.

The sale of this book will contribute to keeping the Safe Motherhood, Infant Survival, ecological and educational projects of Yayasan Bumi Sehat (a not-for-profit organization) in Nyuh Kuning Village, Bali, Indonesia, alive and well.

Dedicated to Gina
and all of you who love her