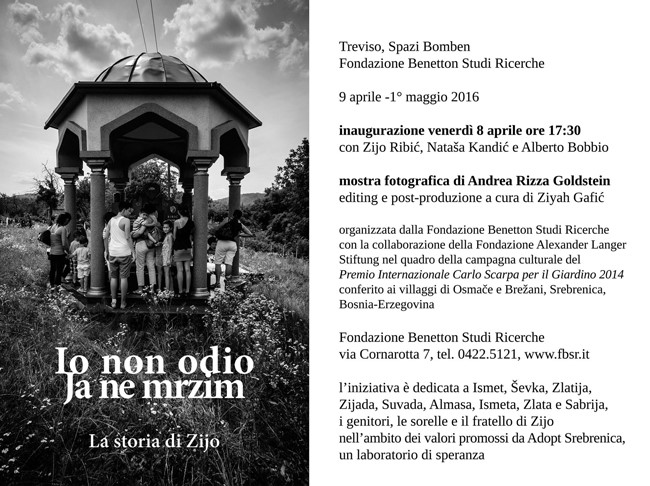 One other day to remember war

Not far away there is the place where to bury other three not recognized children. This is going to happen unless other disappeared person is going to be found and buried near Zijo’s sisters, as it happened with the place near his parents.

Now, if I think about it, Zijo’s forgiveness in one of his victories. If he had not forgiven, he would have to hate terribly the murderer and their horrible actions.
It is not possible to hate just a little the persons who killed your parents, seven sisters and brother, the relatives and who even tried to kill you.
Zijo won also this time. As he won when he escaped the grave among all the dead bodies to testify. He won also as he met many good people. He understood the absurdity of the Bosnian war. The murderers of his family were Serbian paramilitaries, the “Cetnici of Simo”. On the other hand, other Serbian people rescued and protected him. They gave him the opportunity to tell his story… a story of hate and goodness.

During the ceremony of the four girls, there was silence. There were many people near Zijo but his loneliness was palpable. Also in the cemetery near Zvornik, there were many participants. Between them, also Nataša Kandić. This woman fought for many years for the justice of Zijo and his family.
There was also a group of women from Djulici and sourroundings. They lost in just a single day 700 members of their families, husbands, fathers and children.
Today we call this place the “village of the women”… alone. Although their tragedy, their continuous research of the bodies of their loved ones and their fight for justice, those women where there, at the funeral, with strength and dignity. I will always remember that.

I wish to Zijo to find as soon the bodies of the other two sisters and of the two-years old little brother and to get again through what he has already passed. Just in that moment, in the small cemetery not far away from his house (where they lived, were tortured and killed), Zijo will be again with all his family. He will have the possibility to rest, for a moment, from this long and hard journey.

The Serbian war crimes tribunal acquitted the “Cetnici of Simo”. Zijo’s fight for justice is not going to stop. For his dead loved ones, for the conviction of the murdrers but also for the people who helped him to survive…