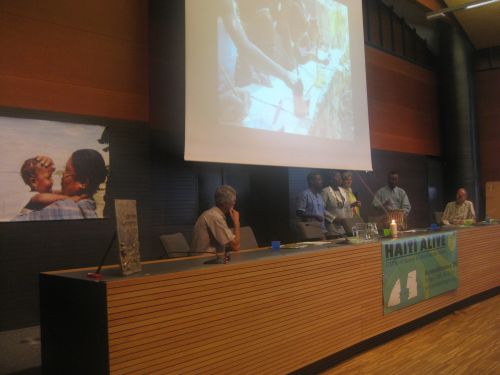 Elane Printemps, known by everyone as Dadoue, was born in 1963 in Port-de-Paix in Haiti, an oppressed and suffering country. Haiti was able to free itself from slavery during the French Revolution and since then its population has never stopped suffering under the revenge of big countries like France and the USA. These never stopped squeezing Haiti under the weight of huge debts, supporting the expropriation of little farmers by big landowners – grandons- and the violence of dictators like the Duvaliers (father and son). Haiti is a country where misery and oppression are not the consequences of an old malediction without hope, but the result of a conscious and repeated robbery from international subjects supported by internal forces committed to preserve their own properties and supremacy.

When she was 20 years old Dadoue left the Teresian convent: “I used to pray and to eat five times a day – she used to tell – and outside the people were starving”. She therefore decided to leave that safe life and to go to Dofiné, in the middle of the mountains, to teach children and to help farmers get back their land against the arrogance of big landowners. She always tried to give priority to the future of the youngest. Pushing education projects for adults and with a spirit of solidarity she started sustainable agricultural projects: production for local self-consumption, realisation of irrigation systems and tree nurseries against the deforestation of the mountains.

With her commitment, Dadoue together with the FDDPA, funded in the 1980s, tried to offer a worthy life to her people, that otherwise were forced to emigrate to the slums around big towns. She especially gave attention to women: she gave them the opportunity to start economic activities, also organised as cooperatives. This meant they were able to stop a long tradition of submission and violence. She started her action in the department of Artibonite and spread it slowly to other parts of the country: children were saved from a life of begging, young girls from prostitution, people were educated in hygiene, traditional remedies were revalorised and medicines against AIDS were distributed. All these actions were a concrete way to assert a few fundamental rights, starting from the constitutions of self-help networks promoted from the bottom.

Such long experience allowed Dadoue and the FDDPA to act very efficiently in the devastation caused by the terrible earthquake in January 2010. They put in first place the needs of the population and could take advantage of their first-hand knowledge of the country they had accumulated over the decades of their activities. They reported the shameful absence of central government and the authoritarian and violent logic of most of the interventions of international aid. Facing the immensity of the disaster, the only reasonable thing was to start a patient reconstruction of basic conditions for life and coexistence by the Haitians themselves.

Dadoue worked hard in that occasion as well, but her life was suddenly taken away when she was just 48 years old. She was killed on a bus on April 24th 2010 in the slum of Cité Soleil by a gunshot during a mugging.

Dadoue was not alone and her friends have continued her patient work since that day, not only in Haiti. For this reason the Alexander Langer award goes to them in memory of Dadoue, who bravely explored many different ways to be master of your own destiny, to act efficiently in the gaps of an inefficient power foolishly proud of its own arrogance. She tried to give a voice to individuals and never lost contact with the real needs of the people, contrasting the modern gigantism of global powers with the solidarity logic of free decisions arising from the bottom.

The President of the Scientific Committee: Fabio Levi