The pillar of shame 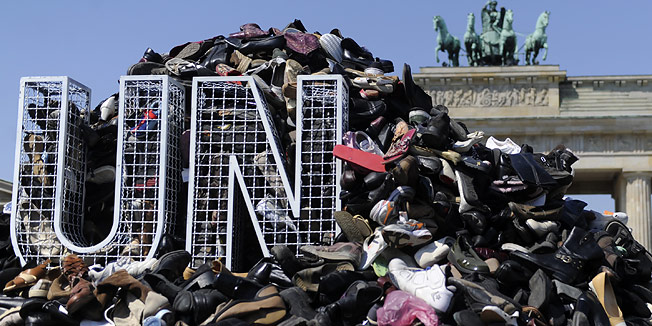 The Pillar of Shame will serve as a metaphor for the immense betrayal of the United Nations in Bosnia and Herzegovina, and as a warning to all future co-workers of the United Nations. The plan: the 16,744 shoes (representing 8,372 victims) should form two gigantic letters measuring eight metres in height and coloured in shimmering white. The two letters (‘U’ and ‘N’) will be penetrated by three monumental bullet holes with real shoes found in mass graves embedded in them.

The Centre for Political Beauty reaches over to the mothers of Srebrenica and will erect the anticipated Pillar of Shame. The project aims to erect a permanent sculpture serving as a lasting reminder of the guilt of western politicians and military officials for the genocide of Srebrenica. – Against oblivion of Europe’s ‘Nights of shame’ (Bogdan Bogdanović).

The actual location of the Pillar of Shame, and the names of western politicians and army generals whose names will be shamed by the Pillar will be selected by the mothers themselves. The Centre for Political Beauty and the Society for Threatened Peoples that together organised one of the biggest memorials for the genocide of Srebrenica in 2009, will also initiate a discussion about the responsibility of the United Nations that has been completely pushed aside in the West for the last fifteen years.

Western guilt -  We will engage renowned Bosnian Artists for the question, how the names will be included into the sculpture.

White concrete - The 16,744 will individually be cast in white concrete. They will fill up the steel construction.

Decency - The sculpture is a direct answer to the fact that the people of the West have no respect toward the survivors of the genocide. Because of the outrageous treason, altogether 8,372 people were killed in Srebrenica and even many more in the rest of the country.