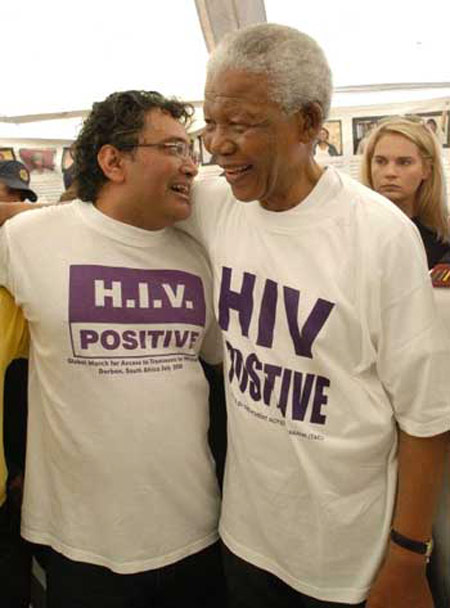 Aids is a disease spread worldwide that concerns the entire planet and that is especially devastating and vulnerable for societies and communities that bare the weight of increasing poverty, emigration and inequality. In South Africa, the severity of the statistics regarding the spread and its social and economic consequences of HIV/Aids have made a grave impact on the way both government and its civil population have responded to the epidemic.
The fight against Aids confronts us with many complex and at the same time delicate issues. In particular it shines light of the problem between the rights of the pharmaceutical companies (copy rights, patents etc.) and fundamental human rights such as the right to life, human dignity, healthcare, and economic justice, all protected by the innovative South African Constitution.
Zackie Achmat and the Non-Governmental Organization “Treatment Action Campaign” (TAC) fight in South Africa against the spread of the HIV Virus and for the right to proper treatment for anyone suffering from Aids.
With this mission, they have confronted the issue from many different angles; taking legal action, raising international awareness and confronting social policy, inspired by the experience that years earlier brought the victory against apartheid.
TAC uses many forms of non-violent protests against the South African government and the pharmaceutical companies; presenting at each act their arguments in front of the Courts, and at the same time protesting and intervening against any form of discrimination at the work place, schools and hospitals. The TAC has managed to unite numerous members from the scientific community as well as men and women from the poorest regions in demand of a “social citizenship”, in other words, the right to healthcare and treatment for everyone, as guaranteed by the Constitution.
During the long campaigns to raise public awareness, Zackie Achmat himself being HIV positive, refused for a long time to take the necessary anti-viral medicines, stating that he would only assume treatment when the government provided all of South Africans infected with the virus with the same possibility.
Simultaneously, the TAC started to buy “generic” medicines for the treatment of the infection from other countries such as Thailand, where the law allowed the production of such drugs. Zackie Achmat himself has helped in importing a considerable amount of these drugs into South Africa.
In 1998, The multi-national pharmaceutical corporations, owners of the patents, have filed a suite, in the Pretoria High Court, against an Act of the South African government intending to make essential medicines more affordable. TAC joined this case as amicus curiae in favour of the Act. After a long pressure, the Pharmaceutical Manufacturers Association (PMA) in South Africa has been convinced to withdraw their claims and to negotiate with public authorities towards the reduction of costs of these medicines.
Zackie Achmat, born in 1962, has been incarcerated several times between 1976 and 1980 for protest activities against discrimination during the Soweto Uprising. In 1998 he founded the T.A.C..
For his commitment in the fight against Aids, accomplished in an effective and innovative way, Zackie Achmat has obtained in his country many prestigious recognitions, one of them being the 2003 recipient of the “Nelson Mandela Award”.

For further information regarding his work and accomplishments please consult the TAC web-site: http://www.tac.org.za.

The award consists of a sum of € 10.000, made possible by the contribution of the Fondazione Cassa di Risparmio di Bolzano.

The award will be presented on the 29th of June 2007 in Bolzano during the annual “Euromediterranea” conference, this year dedicated to the fight against Aids and the constitutional recognition of fundamental rights in South Africa.